You Are Here: Inhouse projects

Optimisation of a four-wheeled-walker for geriatric patients 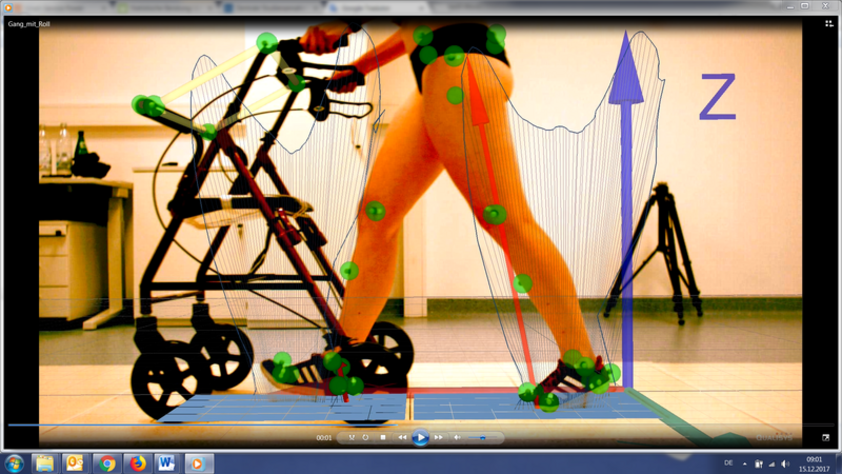 Fretting occurs when two bodies in contact undergo small-amplitude oscillations, which is related to two complex degradation phenomena of structure integrity, namely fretting wear and fretting fatigue due to steep stress gradients. Many mechanical components have the potential to experience fretting damage, such as aero-engine spline couplings, blade-disk attachments in turbines and hip joint implants, etc. A large number of parameters are responsible for fretting crack initation and wear such as normal load, tangential force, coefficient of friction, surface roughness and micromechanical properties.

In this project, a multiscale approach is employed to accomplish the contact homogenisation and formulate a macroscopic law of fretting wear based on microscale information such as the topography and properties of the contacting surface. In addition, an embedded cell model is used in the micromechanical simulation to unterstand the inelastic deformation. A phenomenlogical constitutive model is developed in the framework of continuum damage mechanics to predict the life of fretting crack initation. A damage evolution law based on the critical plane concept is proposed to decribe the fatigue crack initiation process under proportional and nonproportional loadings. The multiscale simulation incorpatating the interaction of fretting wear and damage provides an efficient tool to estimate the structural integrity of the service components subjected to fretting loadings.

Cell migration is a fundamental process which plays a key role in wound healing. Enhancement of cell migration and proliferation could improve the effectiveness of cell-based therapies in wound healing. The aim in this project is to define appropriate mechanical forces in order to enhance cell migration. Therefore, we are using different carrier materials seeded with cells and they are stimulated in custom-made tensile bioreactor. Based on experimental results, we want to figure out how the stiffness of carrier materials and different mechanical loading conditions affects the cell migration.

Next generation of lithium ion batteries in electric vehicles and other portable devices are anticipated to meet the rapidly growing demand for high energy density and chemomechanical integrity over long-term cycles. Silicon stands as a very promising candidate for the anode material due to its enormous capacity, which is theoretically one order of magnitude higher than the traditional graphite anodes. However, Li-insertion/extraction induces large inelastic deformations and stresses inside silicon-anodes, leading to a rapid degradation in chemomechanical properties and failures of battery systems. In this project, we aim to develop a nonlocal chemomechanical model within the framework of finite strain for studying main degradation mechanisms and the relationship between the nanostructures and chemomechanical properties of the silicon electrodes. The proposed model incorporates the lithiation-inelastic deformation interaction, the formulation of the solid electrolyte interphase and inhomogeneous growth of lithiated phases observed in experiments. By employing the developed chemomechanical model, computational simulations are conducted to tailor and optimise the nanostructure of the silicon electrodes in order to improve the chemomechanical integrity of the next generation of lithium ion batteries.

Biodegradable magnesium alloys are regarded as promising candidates for the material of orthopaedic implants due to the desired properties:

The extensive application of biodegradable magnesium implants is still limited by the uncontrollable corrosion rate in the physiological conditions. The development of biodegradable implants with sufficient strength in the healing phase of bone requires understanding the degradation behaviour, quantifying the degradation process of mechanical integrity. In the project, we focus on the experimental investigation of corrosion-fatigue behaviour in the physiological environment and multiscale modelling of the degradation process of biodegradable implants. The phase field approach is employed for studying corrosion mechanism at microscale and establishing the map between the corrosion behaviour and the surface topography of coating. The phenomenological damage model based on the experimental observation is proposed to describe the corrosion-fatigue behaviour of implants at macroscale. The computational simulations are performed for evaluating and optimising the structure design of biodegradable implants for orthopaedic applications.

This research topic focuses on the gas detonation forming technique, which has the potential to form complex geometries, including sharp angles and undercuts, in a very short process time. Currently, finite element method simulations of the cup forming process are performed. The simulations on 3D computational models are carried out with the explicit dynamic analysis using the Johnson-Cook material model. The results obtained in the simulations are in good agreement with the experimental observations, e. g., deformed shape and thickness distribution. Moreover, the proposed computational model is capable of predicting the damage initiation and evolution correctly, which is mainly due to the high-pressure magnitude or an initial offset of the workpiece in the experiments.